In October 1972, Brighton and Hove saw their first gay demonstration in the city by The Sussex Gay Liberation Front (SGLF). Following on from this, there was a Pride March in Brighton during July 1973. The first Pride March may have been small in numbers, but it was a symbolic event for the city.

After years of no Pride Events, Pride in Brighton returned to the city in 1991. Hundreds of people came together against Section 28. The Section 28 objection was about the Government passing laws to ban the ‘promotion’ of homosexuality. Pride in 1991 was again small, however there were events held all over the city bringing together the community and catering for all. The Pride ended with a celebratory and togetherness picnic in Preston Park. 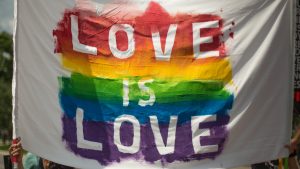 The first Pride experience which is common to use today took place in 1992. From this point, Brighton & Hove Pride began to increase significantly in size and gained support from sponsors, pubs, clubs and local organisations.

Since 1996, Brighton Pride festival has been held at Preston Park and continues to grow year on year. In a controversial move at the time, the date for the 1997 Pride was moved from the May Bank Holiday to early August. The reasoning behind this at the time was unclear, however weather conditions seemed to be the main cause for the month change.

During 2002, there was an agreement made to include and reference the transgender community in the Brighton celebrations. Therefore, 2002 saw Brighton’s first LGBT event promoting Gender Diversity and equality across the city.

The year 2004, was a significant one for the Brighton Pride organisers. It was during this time that Brighton Pride became an official charity and were able to make grants and donations to other charitable and voluntary organisations in the area. From this year, Brighton Pride began contributing and supporting the local community whilst becoming a huge influence in the city.

As support grew, so did the popularity of the event and Brighton Pride was soon attracting A-List celebrities.

Brighton Pride continued to grow and during Pride 2010 a record-number crowd of around 160,000 people attended the event. Despite this, Brighton Pride organisers were experiencing money issues which resulted in bankruptcy. This resulted in Pride 2011 becoming a paid ticketed event in the hope of raising funds. However, since 2013, Brighton Pride has been under new management and has raised significant sums of money in support of the local LGBT community.

The history of Brighton Pride  has been a colourful. From political marches, to organisation bankruptcy and then on to the Pride Event we love today. The cities Pride has grown in size and popularity to become the UK’s largest Pride Festival.

Brighton Pride has proved itself to be the UK’s biggest, boldest and greatest Pride event in the country with community fundraising its main priority.