London’s second-biggest Pride festival (the biggest being Pride in London) is back for 2021!

The year 2021 welcomes the 5th Annual Croydon PrideFest as the 2020 celebrations were cancelled due to COVID-19. We are gearing up for a spectacular show at Wandle Park on Saturday 17th July 2021.

Each year the event draws bigger crowds to witness an exciting display of incredible performers who make for a fun-filled festival. With the cancellation of the 2020 pride, we hope for a bigger and better pride in 2021.

The Croydon Pride Festival strives to communicate tolerance and equity for the LGBTQIA+ community by hosting incredible community-driven events to raise funds and reinvest into creating a bigger and better festival.

The Charity itself was established in 2017, just one year after the first Croydon PrideFest in 2016. The event itself receives no government funding and thus funds are raised in various ways including but not limited to donations, sponsorships, and fundraising events.

The event provides a platform for Croydon’s LGBTQIA+ community, raising awareness, and bringing to light issues which need to be uncovered in a way that is not only tasteful but informative.

There are three main parts to this Pride that make the whole day spectacular. And we’re here to tell you exactly what to expect. 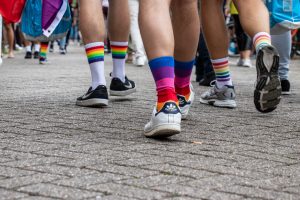 Croydon always plans to make the parade as accessible, fun and safe. Following a simple route, roads will be closed and all supporters of Pride are encouraged to come along. Wear all of the colours you want, sing your heart out and get moving!

It starts at 12 pm in Croydon Town Centre, (CR9 1SH), and makes it’s way to Wandle Park where the main festival takes place. During the parade, there will be moments to stop to let everyone catch up.

In other parts near the tram tracks, you’ll be asked to lower flags and banners to be cautious around the overheard tram line cables. Apart from those things, you’ll be free to go with the flow and let loose! If you want to take part, follow their rules and regulations and sign up here: https://croydonpride.org.uk/

Hosted at Wandle Park, thousands of people gather together to celebrate and party. All supporting the LGBTQIA+ community. There will be masses of music, food stalls and local organisations offering out support and of course, freebies.

This is one that is welcome to all, whether you’ve come with the family, are an ally or a member of the community. Previously, the main stage has hosted many well-known acts such as Kelly Wilde and Lady Leshurr.

There’s truly something for everyone, It’s a great chance to network, educate and party with all things LBTQIA+. The event has many sponsors that differ each year, who all work to bring new themes and decorate the festival.

It’s a busy event with something to do on every corner. Not just in the fact that in previous years, there have been three stages!

But also in the fact that there are activities planned for families and steps made to make the event as inclusive as possible. You can expect British Sign Language interpreters and local charities volunteering to make the day consistently enjoyable.

Last, but not least, is the epic after-party. This one is for the 18+, but a great chance to prolong the celebrations and make the most out of Pride. You’ll need to buy tickets and there’s normally only around 150 available, but for those night animals who would like party alive to themes such as cabaret, pop or disco, then this is for you.

Tickets have previously been set at £10 with a free drink upon arrival, but we’ll update this page if that changes.